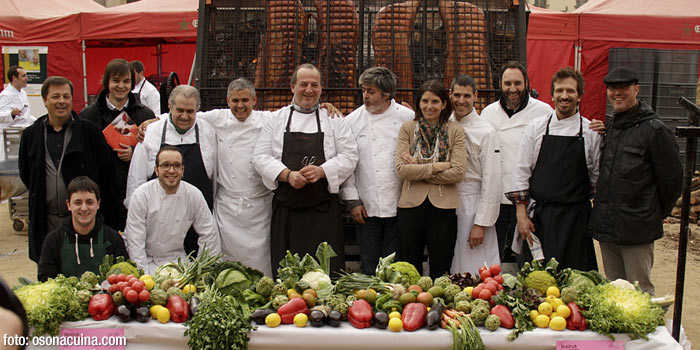 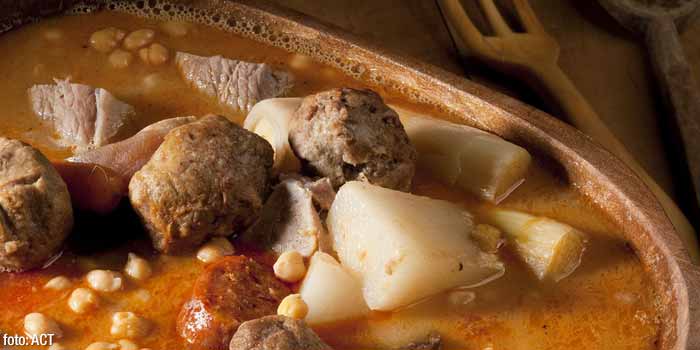 
Carnival is about much more than fancy dress, parades with floats, satirical speeches and traditional dances. Gluttony and a certain amount of drunkenness characterise these festivities, and there are plenty of occasions to fill your belly between Fat Thursday and Ash Wednesday. But always together in a group, because the "King of the Layabouts" can't bear solitude. Would you like to discover some of heartiest communal feasts organised for Carnival?

In ancient times, Carnival was the last opportunity to eat pork before the fasting of Lent. Nowadays, many towns and cities recall this tradition with huge dinners in which the main ingredients are pork, dry-cured sausages and Catalan botifarra sausages. You'll find them in Vilafranca, Torelló and Sallent, but you really shouldn't miss the one held on Fat Thursday in Vic. In the capital of Osona they certainly know how to pay tribute to the animal that can be eaten from nose to tail, roasting whole butterflied pigs right in the middle of Plaça Major. Slow-cooked heaven!

2. 'Xató' and Meringue Feast in Vilanova i la Geltrú

While in Vic the Carnestoltes is welcomed with a shedload of pork, egg botifarra (Catalan sausage) and coca de llardons (pork crackling flatbread), in Vilanova i la Geltrú the custom is to celebrate Fat Thursday with communal feasts whose menu is set in stone: a xató (Catalan winter salad) starter, a main course of omelette and meringue for dessert. But watch out! There's a good chance of you getting this dessert of beaten egg whites plastered all over your face, since this is the ammunition used during the typical festive battles that take place in the Carnival of Vilanova. If you visit the city with children, don't miss the afternoon meringue feast in Plaça del Mercat. And, if you consider yourself daring enough, head to Plaça de les Cols at midnight, where a riotous battle awaits you! 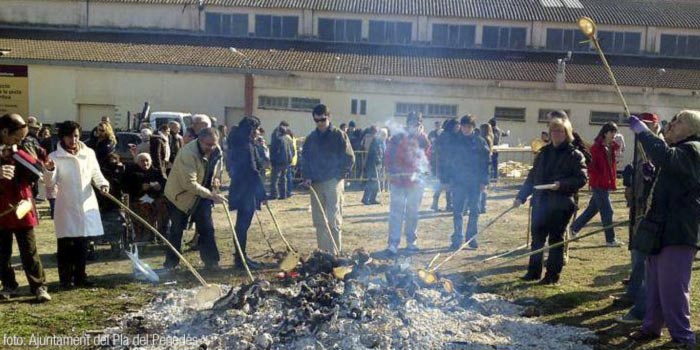 Rounds of toast with salted sardines are the stars of the Carnival Sunday Breakfast in El Pla del Penedès, a pretty town surrounded by vineyards. The festivities start bright and early with the music of the grallers (musicians who play the gralla, a traditional Catalan double-reed instrument) and the lighting of a great bonfire which, once the embers are ready, will serve to toast country bread and roast salted sardines. It's a simple and tasty meal that must be prepared as tradition dictates; that is, skewering the food on the end of a cane, with a friend positioned at the other side of the fire to warn us if the toast is getting burned. And there are always plenty of porron wine pitchers to get you in the festive spirit!

Communal rice lunches are typical in many towns on Carnival Sunday, a tradition stemming from the meals offered in ancient times to the poor in order to help them get through the difficult period of Lent. The religious character of these feasts has been somewhat lost but the desire to have a good time with locals and visitors remains intact: let's not forget that Carnival is a joyful time of year! The Rice Feast of Sant Fruitós de Bages is one of those fun-gastronomic celebrations that you really must experience. With a history of over 100 years, it has been declared a Festival of National Interest for Tourism by the Government of Catalonia.

One of the most popular events on Shrove Tuesday are the escudella (Catalan soup) feasts organised in many towns, such as Gallifa, Sant Feliu de Codines and Arenys de Mar, where it is typical to find astonished tourists contemplating the spectacle of huge pots boiling away in town squares. One of the biggest escudella feasts is held in Castellterçol, where thousands of people eagerly await a taste of this broth prepared using a special recipe. 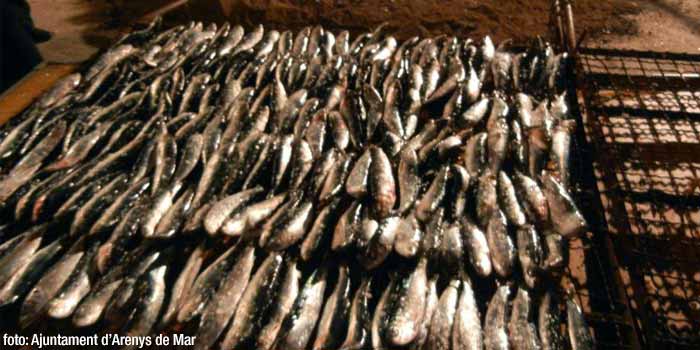