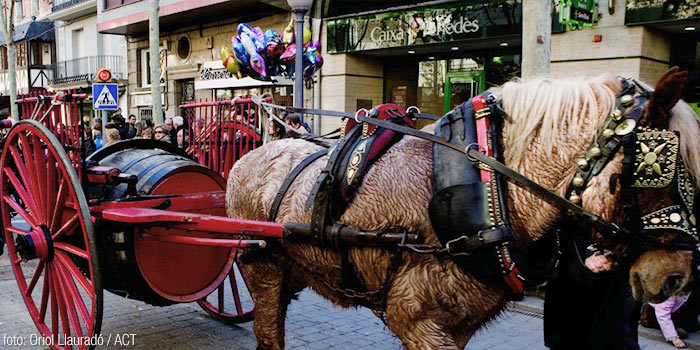 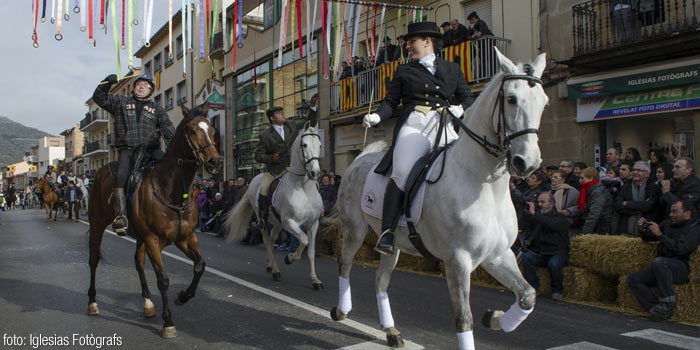 
The festivals in honour of Sant Antoni Abat (Saint Anthony the Abbot), patron saint of muleteers and protector of animals, are among the most ancient in the regions of Barcelona. And they are also among the most interesting, since the typical rituals and customs of these celebrations include many specific local characteristics. They take place every year on around 17 January, so make some space in your diary!

In Ancient Rome it was believed that circling a church three times protected people and animals from accidents and diseases. This belief was incorporated by Christian leaders, who soon associated it with the cult of Sant Antoni Abat (Saint Anthony the Abbot), a hermit who lived in the 3rd and 4th centuries, and to whom the miraculous cure of a piglet was attributed. Since then, the saint has been worshipped as the protector of animals, especially of those used in agricultural work, and his image presides over the blessings of carriages and horses in the towns where the Tres Tombs festival is held. You really must see the oldest Tres Tombs festival in Catalonia, which takes place in Igualada and has been declared a Festival of National Interest by the Government of Catalonia.

The blessing of the animals is also very important in the Festival of Sant Antoni in Sant Feliu de Codines, but the most distinctive element of the celebration in this town in the Vallès Oriental region is the dance, with original music, which has been performed since the 1930s. Another important part of the festival is the communal breakfast, with garlic toast and salted sardines. Washed down with some delicious wine, you'll soon forget that you were up at the crack of dawn!

Another distinctive ritual of the festivities of Sant Antoni Abat are the horse, mule, donkey and Percheron draft horse races held at tracks set up especially for the occasion. They take place in various towns and cities, but the ones held in Puig-reig are possibly the most exciting, with jockeys who don’t hesitate for a second to demonstrate the power of their animals. If you go there, don’t miss the ribbon game that follows the prize-giving ceremony, a mediaeval game typical of this town in the Berguedà region.

For a truly distinctive celebration in honour of Sant Antoni, head to Balsareny on the Sunday before carnival. It’s called the Muleteers’ Festival and pays tribute to the work of men who travelled along the ancient camí ral (royal way) paths with carts overflowing with goods. That’s why the most eagerly awaited event of the celebration is the muleteers’ procession, a parade of carriages with all sorts of tools and bridles that begins after a great peal of bells. The historical and folk elements of this festival are truly remarkable.

The Tonis Festival in Santa Eugènia de Berga has been extremely successful in retaining its traditional essence. The parade is very realistic, with carts full to the brim with goods, like in the old days. Meanwhile, the animals are adorned with flowers and fancy garments, accompanied by the muleteers in traditional dress. The excited children can hardly wait for the shower of sweets that marks the end of the Tres Tombs parade. And in the afternoon there’s sardana dancing!

The Festa Major d’Hivern (Winter Main Festival) of Vilanova i la Geltrú also holds plenty of ethnographic interest. Held in honour of Sant Antoni Abat, the Tres Tombs festival in the capital city of the Garraf region features five hundred horses which parade anti-clockwise around the church dedicated to the saint. While you’re there, make sure you purchase a Tortell de Sant Antoni, a brioche-style cake stuffed with marzipan, with an animal figure hidden inside it. It’s truly delicious!