From Loyola to Manresa 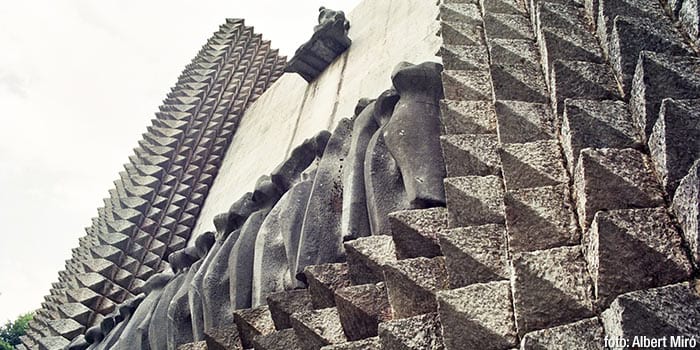 After recovering from his serious wounds and discovering a renewed faith in God, Ignatius of Loyola (www.jesuites.net) set out on a pilgrimage to the Holy Land in 1522, passing through Montserrat on his way. The route that took him from his place of birth to Manresa, where he stayed for ten months, is known as the Ignatian way (www.caminoignaciano.org/en), a journey of 27 stages which has been received publicity in recent years as its 500th anniversary approaches.

The starting point is the town of Azpeitia in the Basque Country. Here we find the Sanctuary of Loyola, a Baroque edifice that was begun in the 17th century as an extension of the Loyola family's ancestral House, where Saint Ignatius was born and raised. Following in Ignatius' footsteps as a knight, the pilgrim leaves Azpeitia and follows the course of the river Urola to Aránzazu, where he or she can visit the Sanctuary of the Virgin, as Saint Ignatius did. The route continues across mountains, through forests and valleys to link up places such as Araia, Alda and Laguardia, a delightful town with the charm of centuries past.

Once we arrive in La Rioja, the river Ebro becomes our new companion. The next major stopping point is Navarrete, which was a centre of nobles and lords in Ignatius' time, and he stopped here to have an audience with the Duke of Nájera and ask for the money he was owed. From this point on, Ignatius followed the Camino Royal, which is today known as the Way of Saint James, but the Basque knight followed it in the other direction, leading towards Manresa. This is why you often find pilgrims walking in both directions in Navarrete.

Following the river Ebro, the Ignatian Way continues through La Rioja, and the cities of Logroño, Calahorra and Alfaro. On reaching Navarra, the pilgrim stops at Tudela, a city with landmarks such as the Cathedral and the Romanesque Church of the Magdalene. The first important stopping point in Aragon is Alagón, which has conserved many elements of the Mudejar culture. After passing through Zaragoza, the desert of Los Monegros forms one of the hardest parts of the whole journey as we head towards Fraga, which is the last stop in Aragon.

Once in Catalonia, the pilgrim will head first for Lerida, and from there to the next stop on the route, which is Verdún, where another outstanding Jesuit, Saint Pedro Claver, was born in 1580, and his birthplace too is now a sanctuary. After passing through Cervera, the pilgrim will arrive at Igualada, where it is believed that Ignatius bought a tunic, as he contemplated casting off his knight's robes. From here, the mountain of Montserrat with its majestic forms and its abbey looms on the horizon. Saint Ignatius spent three whole days in confession here, and after he discarded the clothes and arms of a knight in front of the Moreneta, his conversion was complete. Now dressed in a simple tunic, he left for Manresa, where he would undergo the profound spiritual experience that marks the end of the Ignatian Way.

If you want to follow the Ignatian way, we recommend that you check beforehand where the places for presenting your credentials are. With them, you can stay in hostels and other establishments linked to the way, and spend the night there for a modest price.