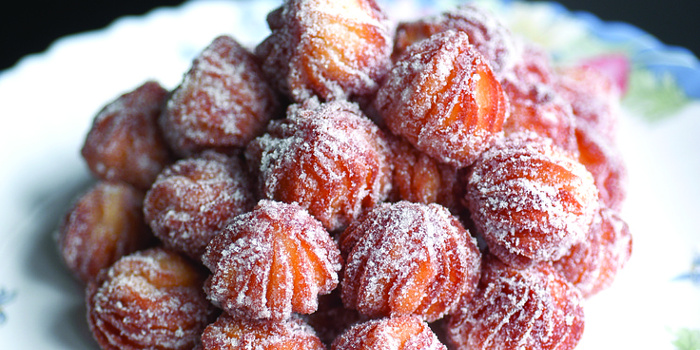 
Although Easter is no longer celebrated with the same religious zeal as the past, the passion for eating sweet things remains unchanged, judging by the amount of traditional desserts prepared at this time of year. Some are very well known in Catalonia, others are only made in certain localities or regions. All, however, are inexpensive, easy to make and delicious. Would you like to try them?

Galetes de Rams (Palm Sunday biscuits). The first day of Easter commemorates Jesus' entry into Jerusalem, where people cheered him with olive and laurel branches. It is the day of the blessing of the palms and branches, and it is customary to wear these dry biscuits so that they can be sprinkled with holy water. In Barcelona, ​​Gelida and Vilanova i la Geltrú, they are known as currutacos, in Prats de Lluçanès, papus, garlandes in Manresa and ninots in Caldes de Montbui. In the villages of the region of Vallès, these traditional Palm Sunday biscuits are called figuretes and, in Mataró, the famous senyores i senyors. Whatever they are called, there is no better teatime snack!

Tortell de Rams (Palm Sunday cake). Another culinary Palm Sunday tradition is the giving of a special ring-shaped cake to godchildren as a gift. It is given by the godfather after the blessing of the palms and is eaten after lunch in the hope that it will bring good luck and keep away illness.

Bunyols (Easter fritters). Although few people still commemorate Jesus' last supper with abstinence and reflection, in the regions of Barcelona, the custom of celebrating Maundy Thursday with Easter fritters still remains. Its basic recipe is milk, butter, flour and eggs, but many variations exist. If they are filled with cream, custard or truffles, you will not be able to resist the temptation!

Torradetes de Santa Teresa (French toast). On Good Friday, those that are not fasting have to use up leftovers and make simple meals to remember the death of Jesus. Hence the religious custom of eating torradetes de Santa Teresa – a very popular sweet dish mainly eaten at breakfast time. They are thin slices of dry bread that are firstly soaked in milk and dipped in beaten egg, then fried in a pan and finally covered in sugar and powdered cinnamon. They are traditionally accompanied by a sweet wine or a mug of freshly-made chocolate. In Catalonia, they are also known as gresoletes dolces, rostes, torradetes, coquetes de Santa Teresa and llesquetes en ou.

Mona de Pascua (Easter Sunday cake). According to tradition, if the Palm Sunday cake is given by the godfather, it is the godmother that gives the Easter Sunday cake to her godchildren on Easter Sunday. It is a crown-shaped sponge cake that in the centre conceals a chocolate egg – a symbol of fertility and love. In the region of Penedès, Easter Sunday is celebrated with a coca garlanda – a sugared ring-shaped cake flavoured with anise liqueur.