The stars of the kitchen 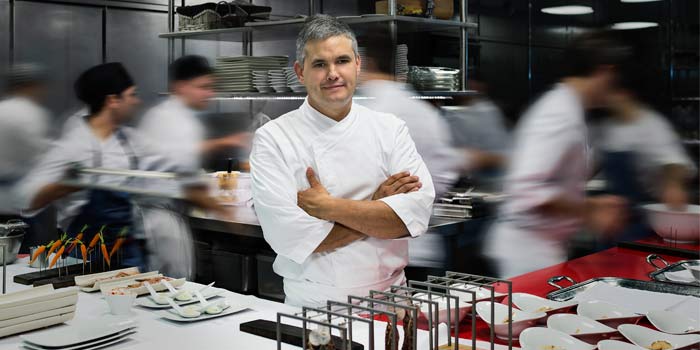 
You’re sure to eat very well in the regions of Barcelona. It doesn’t matter whether you’re sampling the home cooking of grandma’s kitchen, sitting in a traditional inn or small mountain restaurant, or savouring the delights of a local fish market or the fresh produce of an outdoor market... Wherever you go you’ll enjoy a rich blend of aromas, colours and flavours capable of satisfying the most discerning of palates. But if you’re seeking a fine dining experience of the highest order, book a table in one of the area’s Michelin-starred restaurants. There are plenty of options! Every year, new establishments in the province are awarded stars in recognition of their work.

Barcelona boasts two of the handful of restaurants in the world with three stars in the 2019 Michelin Guide. One is Àbac, run by chef Jordi Cruz, and the other is Lasarte, run by Martín Berasategui. Both are located in the capital city. The world’s oldest and most famous restaurant guide doesn’t give away its stars, so consider one of these options the next time you want to dine in a first-class restaurant.

Four restaurants in the Catalan capital have retained their two stars this year: Enoteca, run by Paco Pérez, Moments, run by Raül Balam, Disfrutar, run by the chefs Oriol Castro, Eduard Xatruch and Mateo Casañas, and the restaurant run by the Torres Brothers: Cocina Hermanos Torres. According to the demanding anonymous inspectors of the Michelin Guide, these exceptional establishments offer enough surprises to make them well worth a visit.

The Tresmacarrons vermut-restaurant, run by Miquel Aldana in Masnou, earned its first Michelin star in 2016, joining a sizeable number of one-starred restaurants in the regions of Barcelona. These include two establishments in Osona (Can Jubany and Fonda Sala), two in Berguedà (Els Casals and Estany Clar), L’Ó in Sant Fruitós de Bages and Lluerna in Santa Coloma de Gramanet.