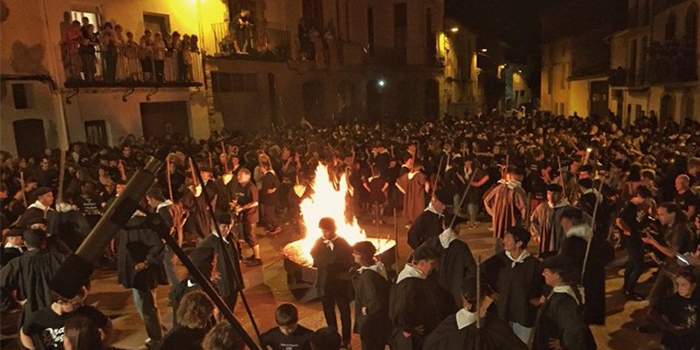 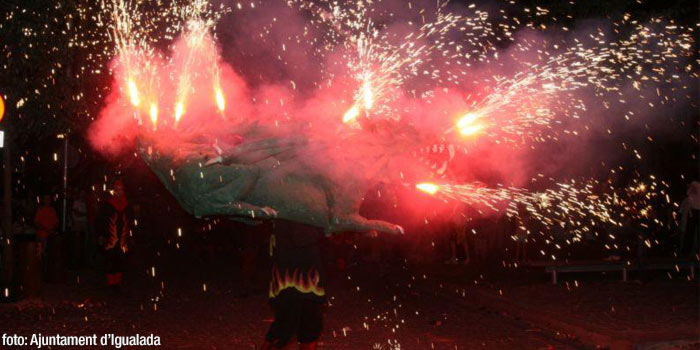 Arrival of the Canigó flame in Igualada 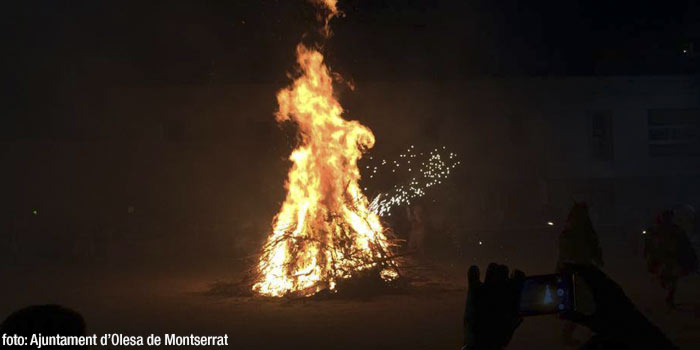 
Looking for ideas to celebrate the shortest night of the year away from the beach? How about enjoying the festivities of Saint John’s Eve somewhere inland? In the inland regions of Barcelona you can go on a torch march, marvel at a human pillar being raised or enjoy a ball de bastons (stick dance). Here are a few options for enjoying this magical night like never before. You’d better believe it!

Saint John’s Eve, known locally as the revetlla (open-air celebration), the Night of Witches or the Night of Fire, is celebrated to the full in Prats de Lluçanès, what with the arrival of the Canigó Flame, a traditional street parade and the lighting of the bonfire with sardana dancing, all accompanied by coca (sweet Catalan flatbread), hot chocolate and muscatel sweet wine. But the highlight of the festivities is probably the torch march that takes place on the following night. Accompanied by a band of musicians and cheered on by visitors and locals alike, the traditional march is followed by a gala ball, the election of the town’s Pubilla (Heiress) and Hereu (Heir) and a fireworks display. It’s got the lot!

2. Stick Dance with fire in Artés

Ancient traditions are alive and well in Artés as well. This town in the Bages region is famed for one of the most entertaining open-air celebrations in the area, but it also remains faithful to tradition on Saint John’s Eve. Its stick dance with fire will take your breath away! We don’t want to spoil the surprise by giving too much away; all we’ll say is that it involves violins, gralles (small Catalan double-reed instruments), devils and some very long fire crackers...

3. Human towers to welcome the Canigó Flame in Igualada

The star of the show at the Saint John’s Eve celebrations in Igualada is the Canigó Flame, which local schoolchildren and athletes carry there by relay. The retinue makes its way through the city and ends up at Plaça de l'Ajuntament, where it is welcomed by the human tower builders of Igualada, the famous Moixiganguers, who raise a human pillar in honour of the fire that symbolises Catalan identity.

In Olesa de Montserrat, Saint John’s Eve is celebrated with a packed schedule of events that culminates with the lighting of the bonfires prepared by local children with pieces of wood, old furniture and junk. This is followed by a light, fireworks and colour show at the Plaça de l'Ajuntament... And firecrackers, lots and lots of firecrackers, an essential ingredient for celebrating the summer solstice festivities.

Castellar de n’Hug is one of the most popular towns in the Berguedà region. Thanks to its wonderful setting in the Cadí-Moixeró Natural Park and its proximity to the source of the Llobregat River, it’s always a great destination if you want to get away from it all for a few days. But if you’re looking for a special occasion to explore the town, the open-air celebrations on Saint John’s Eve are as good an excuse as any. What’s more, an aplec (special gathering) is held the following day at the Chapel of Sant Joan de Cornudell which you’re sure to enjoy. Organised as part of one of the town’s main celebrations (Festa Major Xica), the gathering has a strong folkloric and traditional flavour, including a mass, the sharing out of blessed bread rolls and a traditional breakfast.