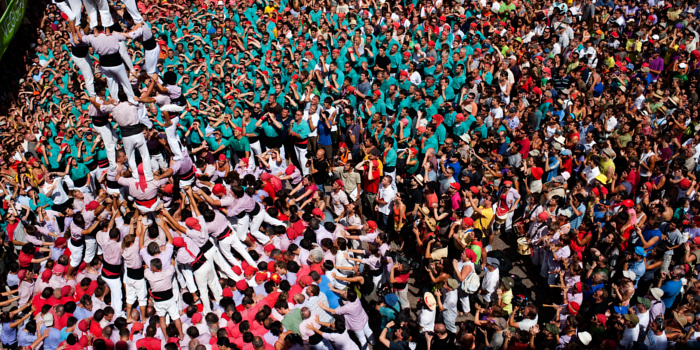 Human towers at the festival of Sant Fèlix in Vilafranca


If you think that you have to go outside the regions of Barcelona to enjoy ancient spectacles and traditions, you have obviously never experienced the atmosphere of the festivals of human towers (castells) or the Patum on Berga's Saint Peter's Square. These traditions are UNESCO Masterpieces of the Intangible Heritage of Humanity and must-see cultural expressions that need to be added to your diary!

UNESCO also included the Patum of Berga to its exclusive list of intangible masterpieces. The UN agency believes that it is vital to preserve for posterity a festival whose origin is to be found in the theatrical performances that used to accompany the Corpus Christi processions of the Middle Ages, in which fire, music and a variety of effigies were the main protagonists. Watching the demons and beasts dancing to the fast pace of the drums is such an impressive sight that it is not easily forgotten!