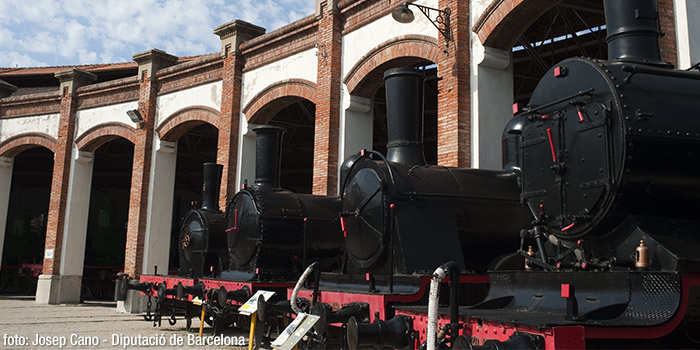 
The steam train is, without a doubt, one of the most important inventions in the history of humanity, an extremely powerful machine capable of transporting people and goods quickly, safely and cheaply. This wonderful legacy of the Industrial Revolution continues to fascinate young and old alike, judging by the number of train buffs around, especially in the regions of Barcelona. And it’s no coincidence! From Mataró to Montserrat, here are 5 destinations where families can enjoy the magical world of railways.

Did you know that the first train to circulate on the Iberian Peninsula did so on 28 October 1848, between and Mataró? Well, it did! This milestone was achieved thanks to the enthusiasm and perseverance of an indiano, Miquel Biada i Bunyol, who wished to connect his native city to the Catalan capital. The project was a success and, to pay him tribute, Mataró organises an impressive Railway Fair every year. Make the most of the chance to climb aboard the ridable miniature train installed in the square, sign the kids up for a railway model-making workshop and visit the model railway exhibition.

2. Railway Museum of Catalonia in Vilanova i la Geltrú

When the 19th European Model Railway Congress was held in Vilanova i la Geltrú in 1972, nobody imagined that the vehicles exhibited there would stay in the capital of the Garraf region and lead to the creation of the Railway Museum of Catalonia. Today, the museum boasts a comprehensive collection of steam locomotives, including some of the oldest trains to be found in and a bogie that belonged to one of the first passenger trains in the .

Are model railways more your thing? No problem: Igualada is home to the Miniature Train Musuem, a jewel of a museum with hundreds of reproductions of locomotives from every period. You’ll be surprised at how big some of the pieces are in this carefully curated collection and at the huge amount of detail that has gone into them.

Do you fancy climbing aboard an old train, enjoying the views and feeling the wind in your face? Head to La Pobla de Lillet and take the Cement Train, the railway that historically connected the cement factory of Castellar de n'Hug to the station in Guardiola de Berguedà. It’s a 3.5-kilometre journey that takes about 20 minutes, but we recommend taking it a leisurely pace and stopping off at the Artigas Gardens, the third stop on the route. Designed at the turn of the 20th century by Antoni Gaudí, the gardens are wonderful in terms of both architecture and landscaping!

5. Funicular Railway of the Monastery of Montserrat

Now that we’ve mentioned amazing views... Why don’t you take a trip on the Funicular Railway of Montserrat the next time you pay a visit to the world-famous monastery? It will take you right to the centre of the sanctuary, but on the way up you’ll have a chance to admire the incredible beauty of