Vilafranca del Penedès: a day trip to the wine capital of Catalonia 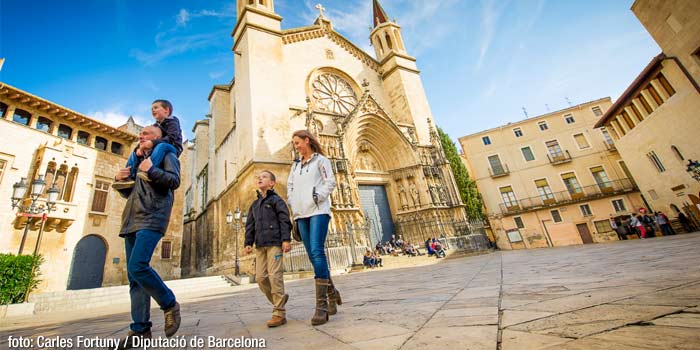 The first time Olivier visited Barcelona with Laure was a bit of a disaster. He wanted to persuade her to move to the area, but the weather let him down. It rained, the wind blew hard and the temperatures plummeted. The grey skies over those few days were hardly what the young Frenchman had in mind in order to convince his girlfriend to leave Lyon and settle in Catalonia. “We’ll be back,” he thought.

Fast-forward 15 years and Olivier is a barceloní through and through and, whenever he can, he heads off on a day trip to Vilafranca del Penedès, the wine capital of Catalonia.

He says the first thing he was asked on arriving in Catalonia was, “What can you do?” Since then it’s been non-stop; he quit his job as a salesman and started up what has become the world’s most-read French blog on FC Barcelona: Barça Inside. What’s more, a few years ago he began to organise guided tours of the Camp Nou for tourists from all over the world. He’s possibly one of the most knowledgeable people about the club’s facilities but Olympique Lyonnais sera toujours dans son cœur.

When it comes to travelling for pleasure, Olivier and Laure like to get away from the hustle and bustle of the capital. Whenever they can, they climb aboard the train at nearby Sants Station and head to the so-called wine capital of Catalonia, Vilafranca del Penedès, which is where we’ve bumped into them today. “When you head inland, that’s when you really understand the roots of Catalonia,” explains this Lyon native as he strolls around the city’s old quarter.

But the journey on public transport to get to Vilafranca is worthwhile in itself: “When the train leaves Barcelona, you begin to see acres upon acres of Mediterranean vineyards and, 40 minutes later, you’ve here in Vilafranca.” What’s more, the train station is right in the city centre: “It’s a great option for a day trip,” explains Olivier as he greets an acquaintance.

When the nice weather arrives, the pedestrian precinct of Vilafranca becomes full of life: it’s all go for the waiting staff on café terraces, while shops become busier and hundreds of families stroll along these charming streets with a mediaeval feel. Olivier says the main reason he comes is for the children: “We go on bike trips, take walks in the countryside and play in the parks.”

Plaça de la Vila, the main square, known as the most castellera, in reference to the world-famous castells (human towers) assembled there during local festivities, is one of the city’s main landmarks. On one side you’ll find the Palau Macià and, on facing it on the other side, a Gothic palace that’s home to the city council. Once you’re here, even if it’s the first time you’ve stepped foot in Vilafranca, you won’t need a map: “From here, you can explore the narrow streets around the square, which all have their own charm.”

Here, more than anywhere else, you should keep your eyes peeled in order not to miss any of the architectural jewels preserved in the city. Olivier tells us about the Basilica of Santa Maria, the historical cemetery and the Centre Agrícola building, not to mention Casa Miró by the architect Santiago Güell, built in the Catalan modernist style (similar to the French art nouveau movement that crossed the Pyrenees at the end of the 19th century).

And what better way to round off a stroll in Vilafranca than a glass of Penedès wine? Olivier takes us to a rather unusual place for this tasting. Although there are plenty of wineries in the surrounding area, he suggests a visit to the Vinseum, the Wine Culture Museum of Catalonia. It’s located right in the city centre, specifically in the ancient royal palace of the Crown of Aragon, built in 12th and 13th centuries. The museum boasts a wide variety of local wines. When the sun goes down, before enjoying a great meal of local produce, it’s time to relax and chill out: “A Frenchman will no doubt tell you that his wine is superior, but these ones have made me have my doubts,” exclaims a laughing Olivier.

To complement Olivier’s visit, we suggest: